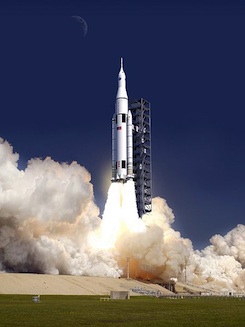 Space Launch System (SLS)
With its superior lift capability, the SLS will expand our reach in the solar system, allowing astronauts aboard the Orion spacecraft to explore multiple, deep-space destinations, including near-Earth asteroids, Lagrange points, the moon and ultimately Mars.

VACCO Industries is the premiere supplier of critical cryogenic and pneumatic space flight components to the U.S. manned space and expendable launch vehicle programs. Our products have been used for critical applications throughout the Main Propulsion System (MPS) on programs, such as Apollo, Space Shuttle, and now our country’s newest heavy-lift launcher, Space Launch System (SLS).

Due to the large number of heritage designs available, VACCO can provide qualified, flight-proven valves and controls for virtually every part of the Main Propulsion System (MPS) system. In many cases we can even provide more than one technical approach—providing our customers greater flexibility in vehicle design.

Taking its heritage from the Shuttle Program, VACCO’s 12” cryogenic prevalve will be aboard the SLS Core Stage to support the propellant system chill down, control the propellant flow to the engines, and safe the MPS when necessary.